UC comes to the table after all

Tens of thousands of Academic Workers held the line and showed up for Day 2! UC returned to the bargaining table, despite having previously declined to schedule any sessions for today. The pressure is working! As always, Academic Worker bargaining teams are ready and willing to meet with UC around the clock to get a deal. It is your collective action that will keep bringing them to the table, so stay strong tomorrow!

Watch the video below in which UCLA UAW 2865 Bargaining Team rep Michael Dean talks about the fight to bring UC back to the table today. 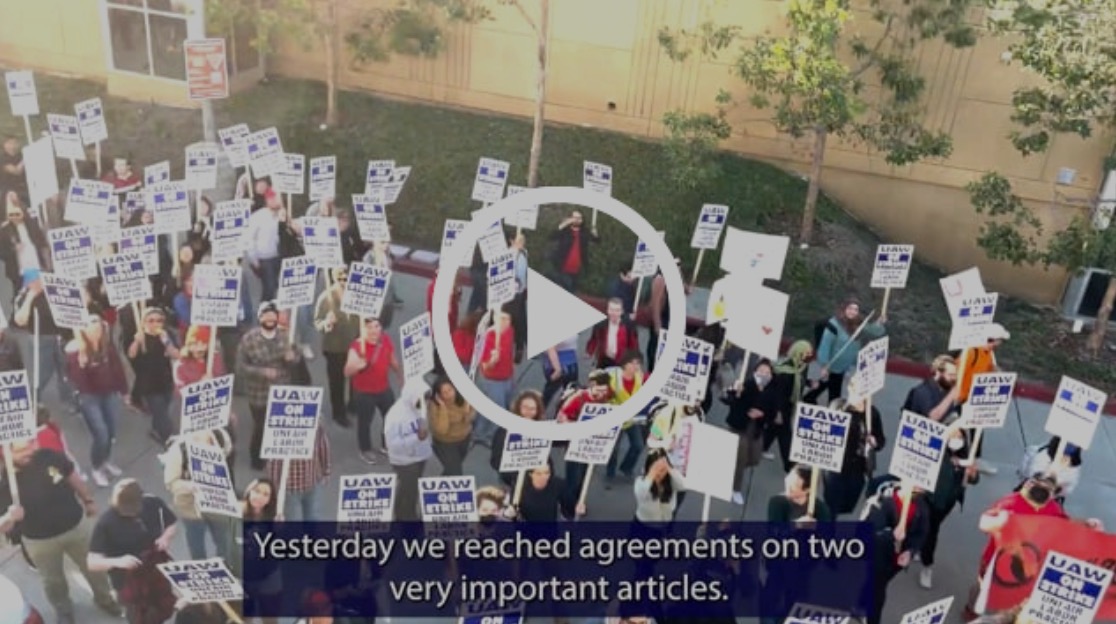 Bargaining Update
For the first time, the University proposed improved alternative transportation benefits in the Parking and Transit article. They also stated that they intend for these benefits to be similar for all Academic Student Employees, Academic Researchers, Postdocs, and Student Researchers. Their proposal contained several of workers’ core concepts: (partial) reimbursement of transit costs, a transition to free transit passes, and discounts for e-bikes. Academic Workers countered that we want a better benefit: the University must provide fully subsidized public transit and more support for bike commuters. Tomorrow, bargaining resumes in-person at UC Irvine.

Support grows
Support for our strike continues to pour in. Senator Bernie Sanders tweeted his support for Academic Workers today, and Congressperson Alexandria Ocasio-Cortez retweeted us. Senator Alex Padilla, Congressperson Adam Schiff and many other elected leaders have also expressed their solidarity.

Solidarity from the Labor Movement
In an incredibly powerful moment of worker solidarity at a massive rally at UCB today, President of Teamsters Joint Council 7 Jason Rabinowitz announced that the Teamsters have sanctioned our strike. Union truck drivers including UPS will respect UAW picket lines and not make deliveries to the University for the duration of the strike.

From the widespread and enthusiastic press coverage we’ve received to the high-level elected leaders who have expressed support for our movement, it’s clear that the public is in UC Academic Workers’ corner. As bargaining resumes in earnest tomorrow, let’s allow that support to keep fueling us in our fight to stop UC’s unlawful behavior and win fair contracts. See you on the picket line!